The Philosophy and Style

Stuart's winemaking philosophy is to limit all techniques to what he calls "basic principals", where only fundamental techniques are used to make his wine. He favours natural acidity, wild yeasts and his wines are stabilised naturally.
He does not use fining agents, rather utilising all the natural characters of each variety to create unique character and interest. Many of his wines are unfiltered and many have only minimal amounts of sulphur added and nothing else. Ultimatley, he just wants to make wines which are a delight to enjoy.

He believes that the best wines are the purest wines; wines which reveal qualities of the grapes they were produced from. In 2017 Stuart begun farming his own vineyard. An important step for a producer who is always focused on quality and technique. He believes in creating a healthy ecology below and above ground; where he has never used herbicides and he practices organic and sustainable techniques where possible in his farming.

The Name
The brand name is taken from the phonetic spelling of Alchemy. Aligning to a strong resonance of the meaning of 'creating the elixir of life' - in this case the wine.

The Symbols
The symbolism of the Alkimi brand mark draws upon the basic representation of Alchemy through fire, water, air and earth. These components all have a role in the cause and effect and therefore the beauty and chaos of nature. And from nature, Stuart gives the consideration and respect to  the season, the soil and the fruit.

The Artwork
Mistral Series
The label artwork was created by abstract expressionist, Christopher Shelton. Stuart and Chris have shared many glasses of wine and day trips around Victoria talking about art, wine and labels. This original oil on canvas piece came from Chris' interpretation of a number of photos taken by Stuart.

Yarra Valley Series
The newly released series' artwork was created by Duncan McDade. Duncan is an animator and interactive designer based in Berlin, Germany. He created moving images of grapes, then specific frames were captured and transposed to the labels. This is his interpretation on what happens during the winemaking process; many layers coming together and moulding around each other, 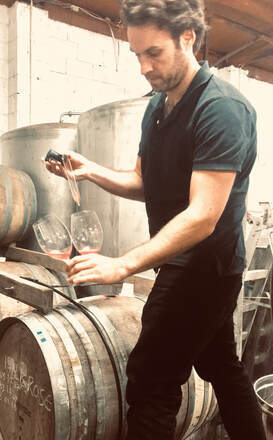 Stuart has a passion for the wines of the Rhone Valley and, up until 2019 he had dedicated his entire brand to those particular varieties that are best known there. He feels the Yarra Valley has great potential for Rhone Valley varieties in the future and he is working towards putting this belief into relaity.

Having been in the Yarra Valley since 2012 Stuart always acknowledged the high standard of winemaking in the Valley, in particular for Chardonnay and Pinot Noir. After many years making and learing about the wines and Yarra Valley area, Stuart began making a range of wines which are more typically found in the Yarra Valley in 2019. These are sourced from spectular sites and consist of Chardonnay and Pinot Noir, with more varieties already in the works which will be released in due time.

​The same vintage Stuart began to make a range of wines which have a "park wine" feel. This range now includes orange wine, Pétillant Natural and light red styles. These wine are still made with as much care and attention as his other wines and the grapes are still grown in exceptional areas of the Yarra Valley. No compromises are made.